Everyone has to start somewhere — for ABC's "Dancing with the Stars" host and Fox NFL sideline reporter Erin Andrews, somewhere happened to be Tampa Bay. 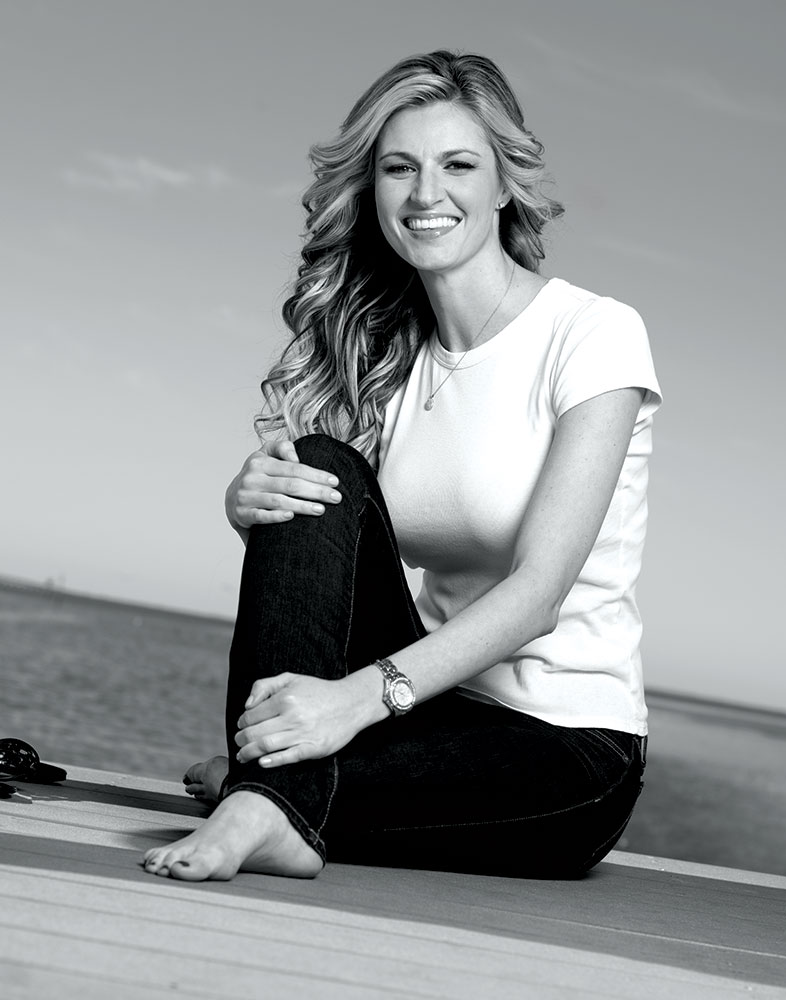 Erin Andrews orders a grande hazelnut latte with a triple shot of espresso at a Brandon Starbucks. It is 7:30 a.m., and she already had breakfast (coffee, strawberries and a cinnamon bun), but still she craves “lots of caffeine” and is eyeing the refrigerated food case. Standing 5-feet-10-inches tall and wearing a bright purple velour tracksuit and Nike tennis shoes, Andrews has no makeup on, and her long, wavy blonde hair is slightly unbrushed, yet most still would consider her drop-dead gorgeous.

If this were a coffee shop in Gainesville, Florida; Tuscaloosa, Alabama; Blacksburg, Virginia, or some other college town, she would probably be fighting her way through a mob of caffeine-crazed fans, most being of the male persuasion. But here in Brandon, Andrews’ hometown from second grade through high school, she can remain, for the most part, anonymous.

“My dad is recognized here more than I am,” she says. “I can’t go inside a college sports bar. It gets pretty obscene.”

Erin and her father, Steve Andrews, a senior investigative reporter for WFLA News Channel 8, sometimes play a game of “who will be recognized” when they’re out and about in the Bay area. A University of Florida graduate who also attended Bloomingdale High School, the younger Andrews worked as an ESPN sideline reporter from 2004 – 2012, and since then at Dancing with the Stars and Fox Sports.  Her girl-next-door beauty made her a No. 1 pick of sports fans and sports-oriented web sites. She began with the ESPN’s NHL coverage then moved on to college football, college basketball and Major League Baseball before landing her current roles. But her first full-time gig came right here in Tampa, as a Tampa Bay Lightning reporter for the Sunshine Network from 2001-02. Although she previously lived in Atlanta, Andrews now calls Los Angeles home, she considers herself a grits-loving, sun-worshipping Florida girl at heart. Her parents still live in the same house they moved into when they relocated to Tampa from Maine after Steve took a job with WFLA.

On this morning, as our staff knocked on the door of the family’s single-story home, Steve answers wearing jeans and a T-shirt, the family’s 11-year-old golden retriever Emmy Lou trailing behind. Meanwhile, Andrews’ mother, Paula, sits at the kitchen counter having breakfast. Before getting into the car to leave for her photo shoot, Andrews kisses her dad on the cheek and makes plans to meet him for lunch afterwards. She is thinking La Teresita sounds good.

“Although I probably don’t need the Cuban bread,” she says, fiddling with her iPhone. She’ll probably eat it anyway because Andrews does not diet; food is one of her favorite things in the world.

“That’s a great thing about working with so many men,” she says. “They love to eat a lot and they like women who eat.”

It’s from her father that Andrews inherited her love of sports, tomboy tendencies and at-ease nature on camera, and it’s from him that she learned to wear her most important on-the-job accessory: a thick skin.

In an industry dominated by men, Andrews says she had to work twice as hard to prove she was not just another pretty face.

“Especially in the beginning, I felt I had to prove myself,” she says. “You have to prove you love sports. You have to do the research.” She wishes people could see all the work that goes into preparing for a game. Her pre-game-night rituals include late nights studying up on team, coach and player histories. Andrews is not just a woman who wanted to be in TV and ended up in sports. She loves sports, wanted to be on TV and made her career happen. Her decision to attend the University of Florida was a strategic one.

“It was important to have successful sports teams because then all the big-time sports networks would come out,” she says. “CBS and ESPN would always be in town and it was cool to see them out at football practice. I would be out there with the student TV station and I would kind of just mimic and mock what they did. To be out there asking [former football coach] Steve Spurrier and [men’s basketball coach] Billy Donovan questions … it was a great learning experience.”

Her good looks are inextricably linked to her success and popularity, but it’s her knowledge, passion, quick wit and tenacity to uncover stories on the sidelines that have solidified her as a reputable reporter.

“I have such great contacts,” she says. “Coaches trust me.” Over the last few years her fame has skyrocketed, and she has arguably become a sports culture icon. She was featured as a sideline reporter in “NCAA Football 10,” a video game by EA Sports, appeared in a Sony commercial featuring Peyton Manning and Justin Timberlake, was named “America’s Sexiest Sportscaster” in 2008 and 2009 by Playboy, and she hosted a Super Bowl party alongside music mogul P.Diddy.  This was all before working for Fox Sports and ABC’s Dancing with the Stars.

Though her position as ESPN’s sideline star was mostly positive experience, the greatest test of her endurance came last July 2008, when Andrews was forced to live through what most would call their worst nightmare after an illegal peephole video showing Andrews in the nude surfaced on the Internet. Former insurance executive Michael David Barrett was arrested and charged with interstate stalking. He followed her to various hotels, and authorities suspect Andrews isn’t his only victim. The public release of the video devastated her and her family, but now she is back on the air full-time, determined to move on and taking a fight-back approach, using her high-profile status to make a change and empower women by working to strengthen stalking laws and make them more uniform throughout the U.S.

“Because he didn’t physically hurt me, it’s a [lesser charge], which is ridiculous,” she says. “Also, the laws behind video voyeurism are an absolute joke. They have not been able to keep up with technology. We had to beg for it to be a federal offense, and the only reason it is because they said it caused me ‘great anguish and anxiety.’ Everybody thought when he did this to me it was on some little snoop camera — it was on a cell phone. He ripped the peephole out, took his cell phone and videotaped me.”

She speaks passionately of the responsibility she feels to crime victims like her.

“Everything that happened to me,” she says, “I cried and screamed, ‘Why is this happening to me?’ But I had so many women write me and say, ‘We had this happen to us, can you please fight this, because we weren’t able to do anything about it.’ I was fortunate enough to be able to hire a very talented lawyer….and maybe I can make a difference. I hate the cards that were dealt, but now I have to do something about it.”

“Women don’t even know — when you check into a hotel room, your room is pre-assigned. That’s how he would find me. He would call and ask to be put right next to me the day before I got there. So he was already there, waiting for me. He was in the room next to me, sharing a wall with me. Now when I go to hotels I say, ‘Can I have a new room?’”

“People just don’t take it seriously,” she says. “I didn’t, until it happened to me.”

Andrews’ relaxed demeanor says she is happy to be back home. On this January morning, sitting barefoot on the dock at Oystercatchers, a restaurant off the Courtney Campbell Causeway, in a white T-shirt and skinny jeans, black Tory Burch sandals within arm’s reach, she is surrounded by water and palm trees, the two things she misses most — other than her family — about living in Tampa.

“Anything that can get me outside by the water,” she says. “I just feel like with the water you can do so many things. It’s kind of a way of life. It’s fabulous.” Take away the personal stylist (which she calls the best purchase she ever made) and fame, and Andrews is much like many other 30 something-year-old women. She loves “Sex and the City” reruns, “Gossip Girl” and “Keeping up with the Kardashians”, listens to Lady Antebellum, Britney Spears and Beyoncé, reads a lot and admits to being starstruck in the presence of longtime celebrity crush Justin Timberlake. She scrolls through her iPhone and shows off the picture of them together. She also pulls up photos of her baby sister, Kendra, a 28-year-old classically trained dancer wither fiery red hair who is about to make her big-screen debut in Step Up 3D. It was Andrews whobought Kendra her plane ticket from L.A. to New York so she could audition for the role.

“I’m close with my family,” she says. “There are not many calls lately that haven’t been three-way calls.”

Her father still watches every game she covers.  “He’ll TiVo all my games, and if he can’t stay up late and watch them, he’ll wake up early the next morning and watch the rest.”

At the height of college football and basketball seasons, Andrews was on the road five days a week.

“Living out of a suitcase, sometimes I forgot what city I was in,” she says.

At this stage of life, she’s not quite sure what her next step is, career-wise. Sometimes she thinks about moving to New York City so she can take advantage of its nightlife and fashion scene while she’s still young and single. (Editor’s note: Erin Andrews married Jarrett Stoll in June of 2017) But Andrews is keeping her options open.

Ten years from now, Andrews hopes she’s still in the business and married with kids (she’s in a long-term relationship, but her lips remain sealed and won’t reveal her Prince Charming’s name). For now, being the eyes and ears on the field suit her just fine. She relishes in the competitive nature of games, the gritty, down-to-business mentality that permeates the playing field, the high that accompanies her on-the-ground “detective” work and, of course, “having the best seat in the house.”

Tomorrow, she’s off to freezing Manhattan, Kansas. Today, she’s soaking up all the warmth she can in Tampa.

From the pool deck, Andrews looks up. “I just want to stay in the sun for as long as possible.”