The Pellenbarg Family Brings School to the Dining Room Table

Eric and Sarah Pellenbarg had nearly opposite reactions to the mid-March announcement that Hillsborough County Public Schools would be transitioning to e-learning. After the first few weeks of teachers sending lesson plans and all-online work, they were somewhat relieved, Eric says. He then recalls learning that school would be virtual the rest of the year. He sighs.

“It kind of takes a little wind out of your sails,” he says with a laugh. “You’re like, this is pretty tough.”

For his wife, Sarah, it meant the temporary end of driving their four kids (ranging in age from 7 to 15) to three different schools, each at least 20 minutes away from their Carrollwood home, each morning. The pandemic also put on hold three to four hours of chauffeuring to and from extracurriculars each day after school and eliminated Eric’s hour-long commute to his job as an attorney in Manatee County.

“For me, it was like, oh my goodness, I’m going to have all this extra time. We’re going to do family things,” Sarah recalls. “And that’s definitely been the positive overall.”

The family meets in the living room each morning to meditate or take some silence to focus on the day ahead. From there, they’re off to their separate corners. Lucy, 15 and a ninth-grader in Hillsborough High School’s IB program, and Alice, 10 and a fourth-grader at MacFarlane Park Elementary, are self-motivated and work from their respective bedrooms. Miles, 12 and in seventh grade at Terrace Community Middle, works from the dining room table, where his parents can help keep him focused and on task. Then first-grader Miles, 7, likes to take a seat right next to his dad, often wearing his MacFarlane Park uniform, which he began wearing of his own accord. “They’re like two little office workers sitting together doing their work,” Sarah says. 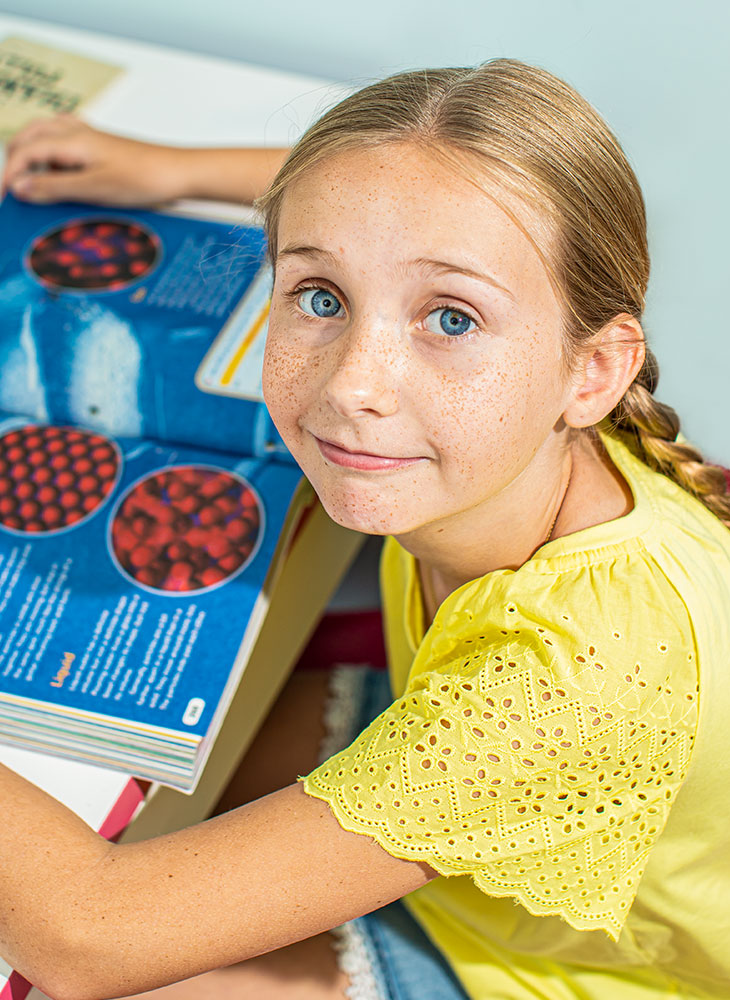 After an initial few weeks filled with technical issues, the Pellenbargs say e-learning progressively became smoother. School days were made up of Zoom calls with teachers and classmates, worksheets completed through Google Docs and online quizzes in subjects like reading and math. Working alone has sometimes been difficult for the kids, both because they lack the ability to work collaboratively with their classmates when learning new skills and they simply miss the social component of attending school. While isolation from friends has worn on them, Sarah admits, they’ve made the best of it.

“As a family we’ve been doing a lot of bike rides, [going to] beaches, stuff that the six of us, together, would not have been able to find the time to do together before,” Sarah says.

It’s also given each member of the family time to discover (or rediscover) a hobby. Lucy learned to sew and made batches of cloth face masks. Alice has become a baking whiz, whipping up complex creations like cakes and macarons. Sarah, who writes appellate briefs, has had time to read books. And perhaps most crucially, after a long day of playing teacher in addition to their own work, the grown-ups have a chance to unwind with a drink on their front porch.

“The fact that I get to sit next to my husband at 5 o’clock every day is a definite plus,” Sarah says.

With school wrapping up at the end of May, Eric says parents are starting to become a bit apprehensive of what summer days without the structure of classwork, homework and extracurriculars might look like. He laughs when he thinks about it.

“It’s going to be Camp Dad for a while.”

Commencement in a Crisis